i took part with three stories: IN DESPAIR, IN LIMBO & IN MY MIND

i was able to draw / paint two stories for this issue –
"SPOOKY" which asks for the reason to turn into a ghost? i was thinking of the early death of Genevièv Castrée (in 2016 with 35 years) & Margaret Kilgallen (in 2001 with 34 years)

for my sequence "DEVIL'S HOLE" i have painted acrylic pictures and reworked them for the due-tone pantone publication with airbrush backgrounds.

i have been drawing/painting on two stories:
"MUGELKENSCHEN by Darton Plawin" which is a word twist of KUGEL-MENSCHEN (spherical beings), a story by planton. this legend is visually mixing up with darwin's theoriy of evolution and the upcoming of sexual reproduction.

the second story is called "WHERE I END & YOU BEGIN" after a song by radiohead –ten paintings about the idea of coming together and forming a collective body.

my graphic novel SUMPFLAND is published by reprodukt
hardcover / 168 pages on munken paper/ 2 pantone colors / german/ 20euro
For everyone who orders a book at (m (at) mioke.de) takes part in a lottery for an acrylic painting (more info www.mioke.de/publications.htm)

I'm dedicating this book to my brother Thomas. When we were kids we were sitting in his room reading and drawing. He said he would draw comics as an adult. I said "me too".

The novel is about complexity. Stories are woven into each other. Parallels appear, new connections are made and causality dissolves. A rhizomatic network about love & death, relationship & community, critique of the system & search for meaning. You will find abstract dancing patterns and human like characters, talking plants and dreaming giants, shape shifters, animals & smart snowflakes. Narrated trough classic panel and freely associative drawings. 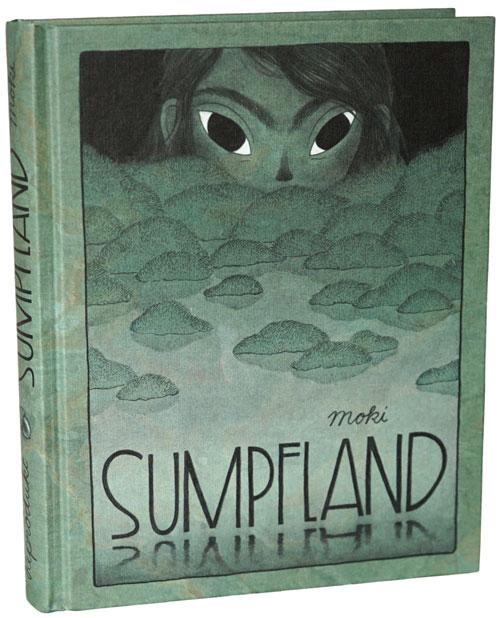 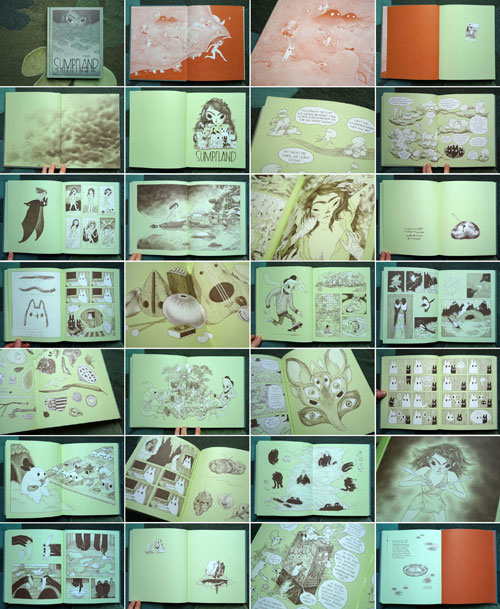 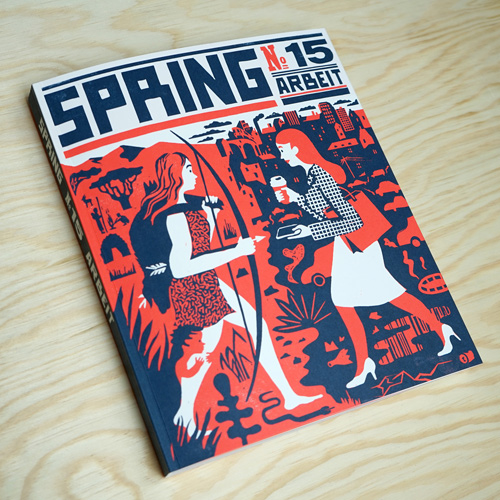 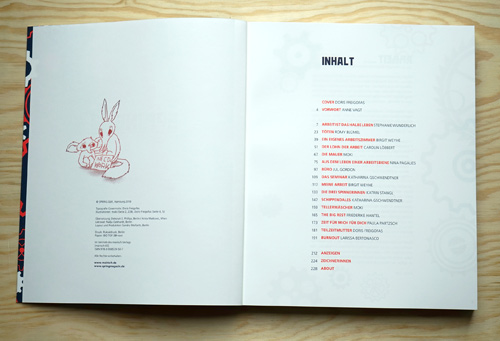 i was drawing two short stories about my first job as a "dishwasher" and "the wall" a story about class society, social marginalisation and work 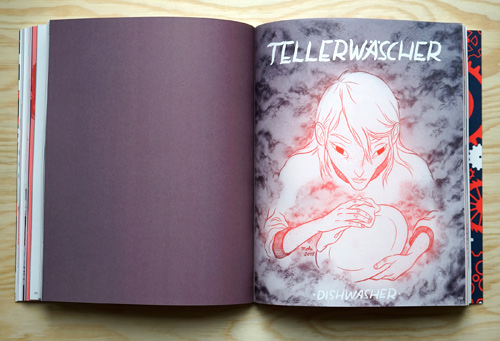 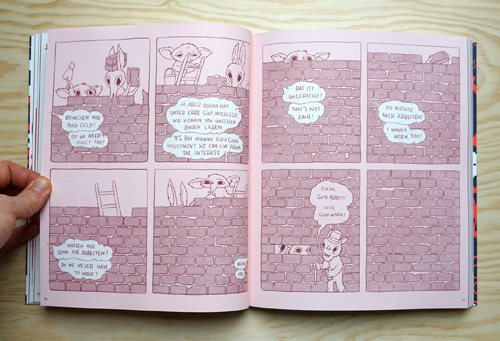 a booklet of the comic story "the careless kind" is no available /28 pages in color / size A6 printed on matt paper / edition of 250 / 4euro + shipping / order via mail to m at mioke.de 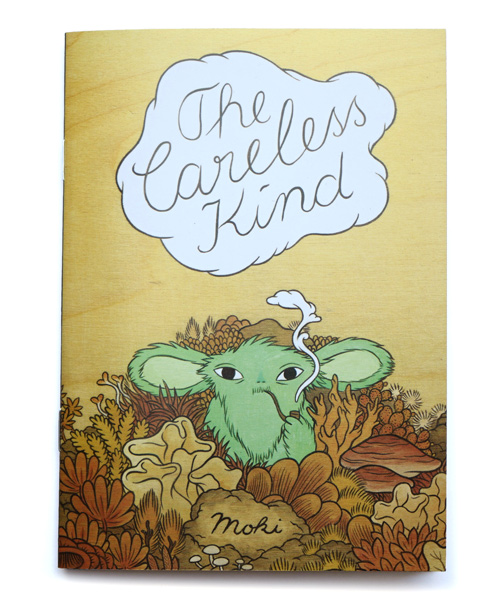 i am drawing on the comic story DISHWASHER for the upcoming 15th issue of the SPRING anthology presenting works from 14 femal artists about the topic 'WORK'. 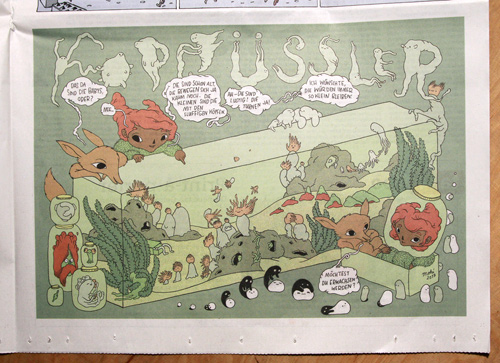 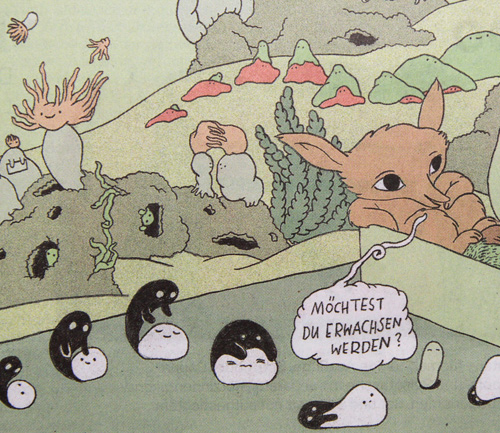 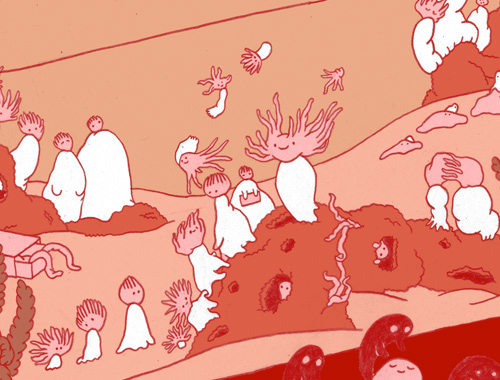 a story told in picture puzzles (wimmelbilder) presenting community and gardening projects. for example 'gecekondu' a traffic refuge between the eastern and western part of berlin squatted in the 80ies - still existing and accepted. the picture story is printed in the SPRING anthology #14 "yo, future!"

"the bilk" is now printed in spring #14. i would like to do an animated video for a piano piece of the musican LAMBERT with this story. 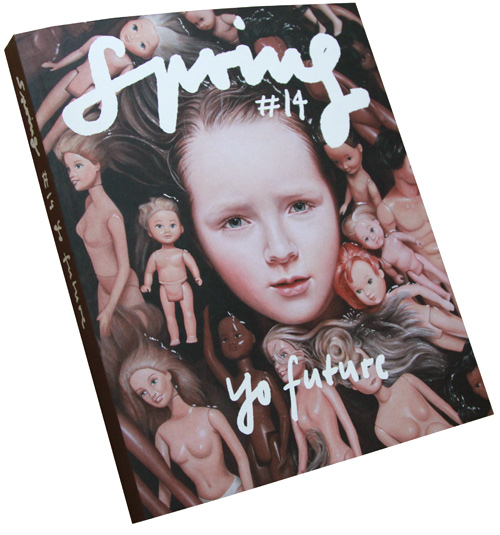 i'm drawing two comic stories for the next issue of the spring anthology #14 - you find a sketch of "unkraut" a portrait of a neighbour who takes care of the fallow grounds in the big shopping street in hamburg ..and a glimps of
"the bilk" which combines an old character of mine with the character of the musican lambert

my latest comic is called NEIGHBOURS, as well as the first issue of a magazine for kids we are working on - more information soon!
here you see some sketches for the story. to read the finished story click on "neighbours" on the left side

i made a map for the city of hamburg. you'll find it at the tourist information.

modern graphics has a new store at kastanienallee 79 berlin. mawil and i did a wall painting for the corner representing all reprodukt comics. come by to find some fantastic new books!

the new SPRING is available at mairisch verlag. it is called "the elephant in the room". i drew this page for the gallery feinkunst krüger with my 5 year old colleague rita.

jim avignon financed and organised a coloring book for the kids who had to leave their homes. you can support this great project by ordering a book for your own children. all profit goes to kreuzberg hilft!

research on "the careless kind" with jesse & rita (text)

interpretations of the character poppoff by my godchild jesse:

in 2009 i have drawn a panorama comic with the characters poppoff & ZKE
for the anthology orang (look for 'poppoff & ZKE' in menu top left).
i made my first pattern with these characters for a london fashion label..

..and i painted a mural in lüneburg/germany.

"one day i dreamed that the rainbow showed up after raining,
but it didn't have any colors and i was the only one capable of coloring it."
(a dream from a boy in mexico)

roger omar collects dreams of children. artists from all over the world interpret them.
watch more on flickr

bowerybird
acrylic on paper, 30cm x 21cm, 2014
comic for and about the musican kirrin island

borderland
acrylic on paper, 40cm x 30cm, 2005
published in panicelectro#3
awarded with sonderman prize at the bookfair in frankfurt 2006